As I was driving through the neighborhood coming from gymnastics with my daughter the other night, I saw some kids outside playing in the street and it was practically dark outside.

As I got closer, I realized one of those kids was my Prince, and initially I waved.  A few more rolls down the street, it hit me.  It was darn near dark, the streetlights were on, and his behind was still outside! 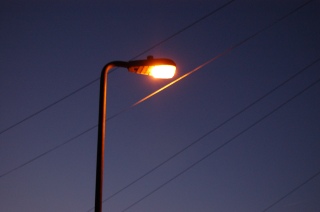 I hit those brakes ,rolled the window down and he got the “old-fashioned” get your butt in the house speech!

I remember growing up and there was no set time for me to be in the house.  My curfew depended on the almighty streetlight!  If my butt was not in the house before the streetlights came on, well lets just say I would get the PSA, of my mom yelling my government name out the window and taking that walk of shame into the house from embarrassment!

“LAKESHEIA TARNISE WILLIAMS!!! YOU DON’T SEE THESE STREET LIGHTS ON??? IF YOU DON’T GET YOUR BUTT IN THIS HOUSE RIGHT NOW, I’M GONNA COME OUT THERE AND GET YOU!” (that’s my mom yelling at me)

Once this was announced, everyone stopped, looked at you, and bid there farewells before their mom put them on blast next!

I keep telling my kids, going outside was the Xbox, Playstation, Computer.  Taking away our fresh air and time to run amuck with our friends outside was the ultimate punishment.

It felt good to pass that tradition down to my son in this day and age of technology.  I’m glad he’s outside playing, interacting with other children, and getting exercise in lieu of being sedentary in front of a screen.